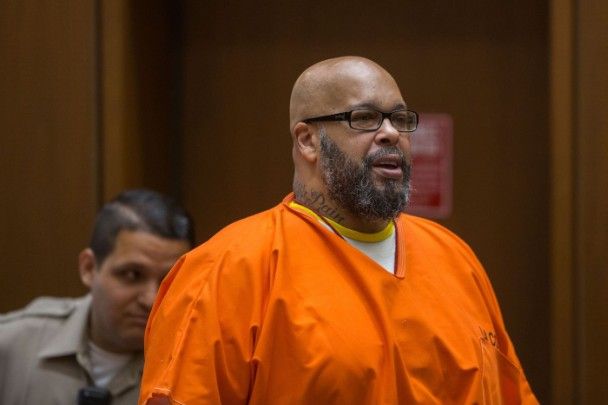 Posted at 13:59h in Article by coolwater 0 Comments
0 Likes

Former Hip Hop music entrepreneur, Marion “Suge” Knight, was accused of hitting two men with his truck in January. He was later charged with attempted murder and murder.
Prosecutors are claiming that Suge Knight intentionally tried to run down a friend along with another man after a heated argument. The incident took place on the N.W.A. biopic Straight Outta Compton movie set at Tam’s Burgers on Central Ave and Rosecrans Ave in Compton, CA.
Sadly, one of the hit and run victims, Terry Carter, Suge’s long-time friend was killed. The second victim, who is actually from the neighborhood where it all went down, Cle “Bone” Sloan, was seriously injured. He had been hired to act as security that day.

James Blatt, who was replaced by David Kenner as Knight’s attorney, claims Suge did not run over the victims on purpose. He claims the former Death Row “gangsta” was simply trying to flee a vicious attack. But, that leaves many asking… why did he turn himself in on Friday, when this happened on Thursday?
Knight’s original bail of $2 million was revoked. The judge considered him to be a potential flight risk. He also believes if out on bail, Suge, who’s known for his bullying tactics, would intimidate witnesses. This came after the detectives on the case told the bail commissioner that Suge could potentially face a nice, long prison sentence because of his violent criminal past.

For instance, back in November, Suge turned himself in for a robbery case. He’d been out on bail since the beginning. In this instance, Suge Knight was arrested, along with comedian Katt Williams, for taking a photos camera “by force”, a popular word used to describe Suge’s tactics.
The alleged robbery, which supposedly occurred in Beverly Hills. Katt Williams is calling B.S., claiming the photo was taking pics of Suge’s 4-year old son. But, neither of them ever took her camera.
Knights was due in court on February 19. But, had to be rushed to the hospital due to complications from being shot. The shooting happened at a Chris Brown pre-VMA party back in August (whole ‘nother incident).

Should we also mention how Knight was one of the main players in a notorious rap conflict back in the 1990s? According to Hip Hop rumors, the music mogul was a big cause of the mess between Tupac Shakur and Biggie Smalls, which eventually led to both of their murders.
Some say Tupac’s death was a hit, set up by Suge. Others believe that it was set up by Puff Daddy, who was Biggie’s manager.

Rumors Have It… Both Deaths Were Gang-Related

Then, there are the parts of the rumors that are related to the Crips and Bloods and Pirus of Compton, CA. Gang-related rumors have it that Biggie’s people were Compton Crips, while Tupac was “up under” Suge, who’s a certified Compton Piru.
If you follow this path of rumors, the Compton Crips killed Tupac, as a paid hit for Biggie. And, in retaliation, the Compton Pirus started a local war that caused bloodshed throughout the entire city. At some point, if these stories are true, it was inevitable that Biggie would be gunned down as well.
Suge went to prison for almost five years due to the beating he and Tupac gave a man at a Las Vegas hotel. The fight occurred just before Shakur was to be found dead… hours later. Can that be a link to his death? Or, as rumors have it, was this all a part of the plan to murder Tupac Shakur?

Now, fast forward to his current case. Suge Knight hit two men with his truck in the Tam’s Burger parking lot. Terry Carter, Suge’s friend and friend to many in that neighborhood, was the one that also was killed.

Who was Terry Carter?

Carter was the owner and founder of Heavyweight Records. He’s portrayed by family and friends as a father figure who tried to help mentor the young men that resided in the community.
Terry Carter went out of his way to help the young boys and men of Compton find successes for themselves. The incident also injured Sloan, a film consultant, actor and long-time member of the local community where the hit and run took place.

Authorities believe that Suge Knight had a heated argument with Sloan, who was working at a location for the upcoming biopic Straight Outta Compton. The film is all about the rap group NWA. This is controversial in and of itself, considering the beef between Suge and Eazy E (RIP) and Suge and Dr. Dre.
No one even knows why Knight was there, except for his claims of having been invited to “squash a beef” with Dr. Dre. The Beats by Dre mogul denies the claims.
All in all, we can surely say that Suge Knight is inching closer and closer to Death Row… ironically, it’s not looking like the one he created so long ago. Suge is facing life in prison for the hit and run that killed his friend, a friend of the Compton community, Terry Carter.