09 Oct Haitians Immigrants: No Match for the Afghans

Posted at 14:59h in Article by coolwater 1 Comment
0 Likes

The Haitian Afghan crisis has been at the top of the Biden administration. Afghan refugees have been making their way to the US by way of the military. The United States has been at war with the Afghans for nearly twenty years, but finally decided to end the outstanding war. President Trump vowed to end the war, but Joe Biden finally took the steps necessary to make that a reality. The US lost Trillions of dollars fighting this senseless war.

Biden’s Commitment to The Afghan Refugees

Afghan refugees fighting against the Taliban were desperate to leave the country. The Biden Administration made every effort to get Afghan residents out of the country. One by one the United States military helped escort thousands of refugees to safety. Over sixty thousand people flew out of Afghanistan to the United States and neighboring countries. The President made every attempt to met all deadlines set by Taliban to remove fleeing residents, us officials, translators, and interpreters working on behalf of the US government. Biden signed the Afghan Resettlement Fund. The Afghan Resettlement Fund will ensure that refugees get food, clothing, housing, and shelter. As a result, this will allow them to get on their feet.

In a 65 to 35 vote the Senate approved funding that would provide $6.3 billion for Afghan resettlement, along with ensuring the federal government remains operational through Dec.  3. – Fox News

Haitians Not Quite As Important 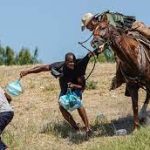 way to the US border. Haitians suffered political and natural disasters to the country of Haiti.  Haiti was hit with an earthquake and the killing of its president Jovenel Moise. In addition to that, Haiti and the US have a very tense relationship along with other European countries.

Haitian immigrants coming to the border was probably the direct result of hearing about Afghans, Mexicans, and other immigrants entering the country. Haitians came from two locations. One was Mexico and the other was Haiti. Haitian immigrants traveled to the Mexico- US border and waited for acceptance onto US soil, but the Biden administration had other plans. Border patrol agents pushed Haitian immigrants by the thousands back to Mexico and Haiti.

Title 42 issued by the Trump administration

Title 42 issued by the Trump administration, is an emergency public health order allowing for the immediate expulsion of migrants. The Biden administration used Title 42 to remove most Haitians from the border. The US and Haiti have an ugly relationship that has never been rectified. Haiti is the only country in the world that beat all European powers who tried to overthrow it. As a result, the world powers including the United States, have cut all funding and aid to Haiti. Haiti gets no aid from foreign powers which has made Haiti one of the poorest countries in the world.

Once Haiti’s president was assassinated the vultures brought the vaccine into the country. Haiti had one of the lowest Covid rates in the world. The United States is not a fan of Haiti, thus no aid was ever given to help Haiti  rebuild after and the earthquake. A lack of resources, money and tools has lead Haitians to flee the country for better living.

Vice president Kamala Harris made very little effort to address the issues of Haitian immigrants at the border. She has been very vocal about other migrants and their needs, but not Haitians. It’s very clear that the Biden administration doesn’t want Haitian immigrants in the country. The images of border patrols whipping and pushing Haitians back across the border shows how the US feels about certain immigrants.

Haitians and Afghans are clearly being but into two different classes. Afghan refugees are being placed into a protective class, while Haitians are not. The six billion dollars pledged to help Afghan refugees makes it very clear that the Biden administration has big plans for them. Air B and B have even pledge free housing to help the refugees get on their feet. Haitians aka black folks are still deemed a problem by the white establishment. No one is truly interested in helping black Haitian immigrants succeed in America.

Afghan’s trials and tribulations are deemed greater than Haitians. No one is sending any real aid to Haiti, in the same manner, they sent the military for the Afghans. The Haitians versus Afghan crisis only shows that there’s an under tone level of racism against all black people of the world.

Why Are Haitian Migrants Gathering at The Border