10 Jun Logan Paul Calls Out Mayweather About His Money

Posted at 15:21h in Article by coolwater 0 Comments
0 Likes

Some seven months after there exhibition fight, Logan Paul, called out Mayweather about his money. Logan Paul, who is 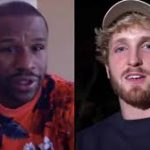 Logan Paul has not been paid apparently since his griping on Instagram. His antics have not gotten Floyd’s attention about the unpaid debt either. My guess is he will get his money but it’s a promoter issue, and not a Floyd Mayweather problem. Logan Paul has been like a kid nagging Floyd for quite some time during and after the fight.

Money is nothing to the Money Team. Mayweather probably forgot all about dude once the exhibition fight ended. The fight was expected to  draw about a $120 million dollars in revenue some sources say. Now that is a lot of money. In a New York Times article the fight money was broken down into how much each fighter would be paid. I can see why Paul is pissing mad.

I think Logan will get paid soon enough now that he’s crying about his money. Floyd’s people probably didn’t even know, but have been put on notice about the mix up. Logan might wanna just stay in his lane from now on and make videos, that way he’ll know exactly when Google is paying him…lol.